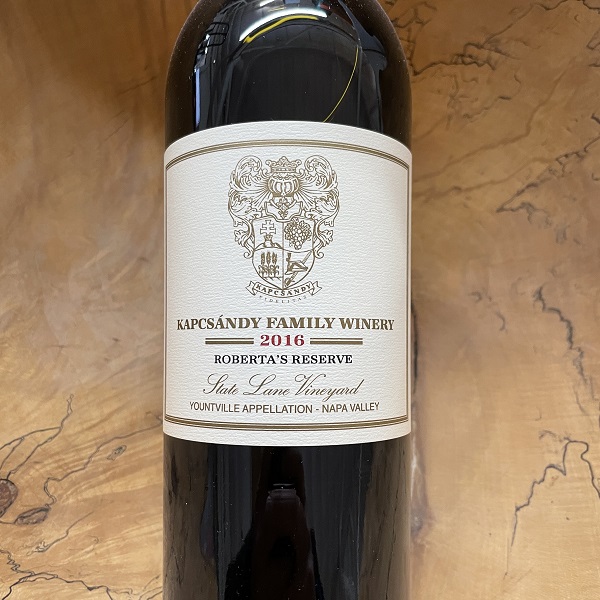 The first vintage of Roberta’s Reserve was 2005 which Robert Parker said, “there is no better Merlot-based wine being made in California”. And Jeb Dunnuck, a protégé of Robert’s wholeheartedly agrees. “Another wine that flirts with perfection is the 100% Merlot 2016 Roberta's Reserve, which was harvested at the end of September and spent 20 months in 70% new barrels. I finished my note on this wine with "Best Merlot in the New World," and I can't think of another wine that comes close to the layered, balanced, majestic style of this beauty. Offering up a kaleidoscope of black cherries, damp earth, chocolate, cedarwood, and spring flowers, it's full-bodied and rich, yet just glides over the palate with a seamless, elegant, pure style that needs to be tasted to be believed. As with all the Kapcsandy wines, it has the purity and balance to offer pleasure in its youth yet is going to evolve beautifully.”
99 Points, Jeb Dunnuck

Nestled in the northern side of Yountville Crossroad is where Kapcsandy has called home since 2000. Previously, the vineyard was Beringer Estate State Lane vineyard which had been the home base for their Private Reserve Cabernet Sauvignon program. When Lou Sr. acquired the vineyard, they did a complete replant of the property with tighter spacing to produce more concentrated fruit. The vineyard is comprised of 15 specific blocks, dominated by Cabernet Sauvignon, Merlot, and Cabernet Franc.