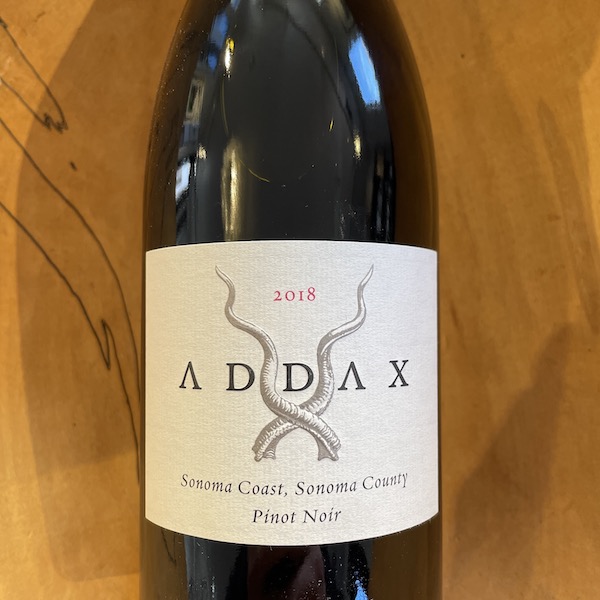 This is the sixth vintage of Addax Pinot Noir brought to the table by Josh Peeples with winemaker Russell Bevan putting his signature touch on this Sonoma Coast 2018 Pinot Noir offering. Coming from Pfendler Vineyard in the Petaluma Gap region of the Sonoma Coast AVA, this is a full-bodied Pinot Noir with notes of spring flowers, black raspberries, kirsch, and licorice with subtle notes of forest floor. The texture is silky and smooth and drinks well immediately upon opening but could benefit even more with a quick half-hour decant. 287 cases were produced.

Crafted by Russell Bevan, one of the most sought-after winemakers in California today, Addax is an artisan winery founded by Brian Kearney and Josh Peeples. What began with a few friends and a few barrels of Cabernet in 2009 has evolved into a phenomenal portfolio of wines, including Oakville Cabernet Sauvignon, Petaluma Gap and Sta. Rita Pinot Noir, and a selection of Sonoma Chardonnays. After more than a decade, they continue their quest to work with exceptional vineyard sites to produce wines with brazen personality. As a part of The Institution family of wines, made at 2100 Hoffman Lane, they utilize their winery in Yountville to highlight some of California’s most sought-after vineyards.