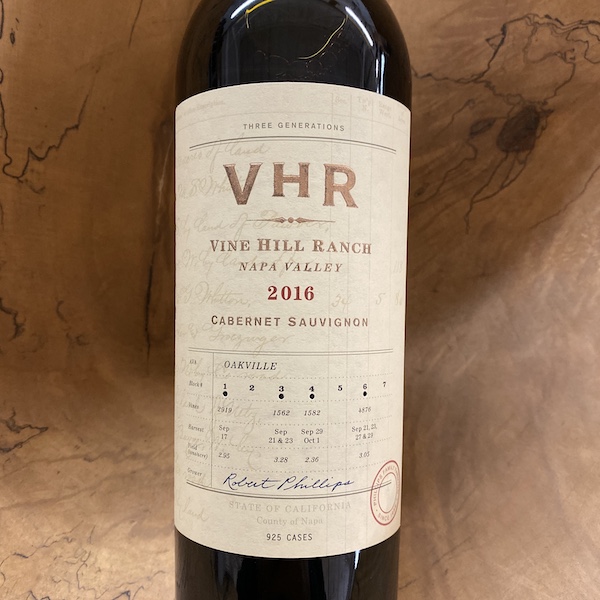 2016 is stunning and is a true testament to exceptional farming led by viticulturist Mike Wolf, whose efforts have also been great at Scarecrow, Lindstrom, Kelly Fleming and Arrow & Branch. The Phillips family are true generational farmers and know their vineyard row by row, vine by vine. Bob and Alex Phillips began cultivating fine winegrapes here in 1959 and, with the founding of Phillips Family Farming, Vine Hill Ranch continues to produce exceptional fruit for a collection of premier Napa Valley Cabernet Sauvignon vintners. Under the watchful eye and incredible talent of winemaker Francoise Peschon, VHR began producing its own wine in the 2008 vintage. “Vine Hill Ranch's 2016 Cabernet Sauvignon is flat-out epic. Look for the 2016 VHR to be one of the benchmark wines of this great Napa Valley vintage. A year ago, the 2016 was powerful and dramatic. Today, the 2016 is super-polished and regal in bearing. Vertical and deep, with tremendous complexity, the 2016 has so much to offer. A rush of black cherry, plum, menthol, licorice, sage, dark spice and earthy notes build as this statuesque Cabernet Sauvignon shows off its magnificent pedigree. The 2016 is a monumental, towering wine.” 100 Points, Vinous