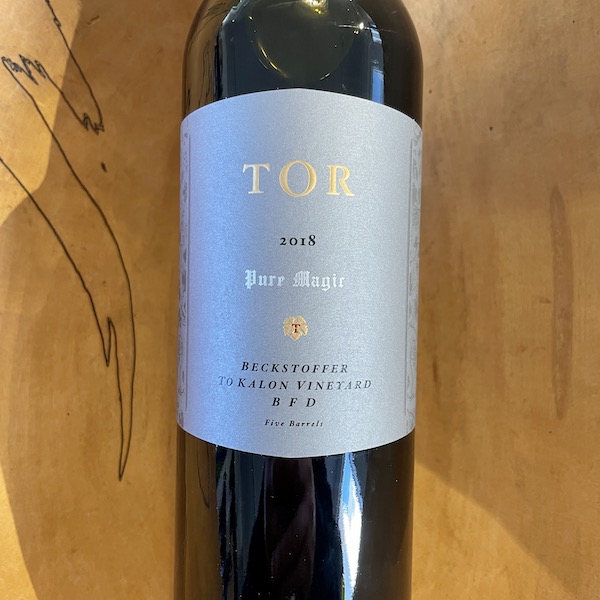 This is only the second time TOR has ever made this blend, the first time was in 2015. This 2018 Beckstoffer ToKalon is a blend of all three of TOR's Cabernet blocks in ToKalon- B Block, F Block and D Block. So, it is a true expression of the ToKalon Vineyard as opposed to a block within the vineyard. The co-fermentation on this wine shifted the flavor profile to more of a graphite/mineral driven wine than the 2018 ToKalon Cabernet while still showing the tremendous dark fruit profile and complexity of this site in 2018. Winemaker Jeff Ames feels like “this is usually one of the prettiest wines in tank. The co-ferment of the Cabernet Franc and Cabernet Sauvignon really make it more aromatic during fermentation.” The final blend was roughly equal percentages of Cabernet Sauvignon and Cabernet Franc. 125 cases were produced.

The TOR house stands on the foundation of single vineyard Cabernet Sauvignons from very special blocks in what some consider First Growth or Premier Cru Napa Valley sites. To them, this is hallowed land, and in the case of Beckstoffer ToKalon and Vine Hill Ranch, land that has a long history of extraordinary wines. In ToKalon, winemaker Jeff Ames, works with five blocks of Cabernet Sauvignon and two blocks of Cabernet Franc. In Vine Hill Ranch, he works with three blocks of Cabernet Sauvignon and one block of Petit Verdot. In 2016 they experimented with co-fermenting the Petit Verdot with the Cabernet from VHR. "This is a very risky and daring experiment that blew us out of the water. If you’ve never exited the water in this fashion it is very exhilarating, so much so, we did it again with the Cabernet and the Franc from To Kalon. It is hard to explain how two completely different personalities merge during the process of fermentation to become such a ONE. We’ve blended them in the past after fermentation, with completely different results. The only explanation we’re working with now is it has to be PURE MAGIC." - Tor Kenward