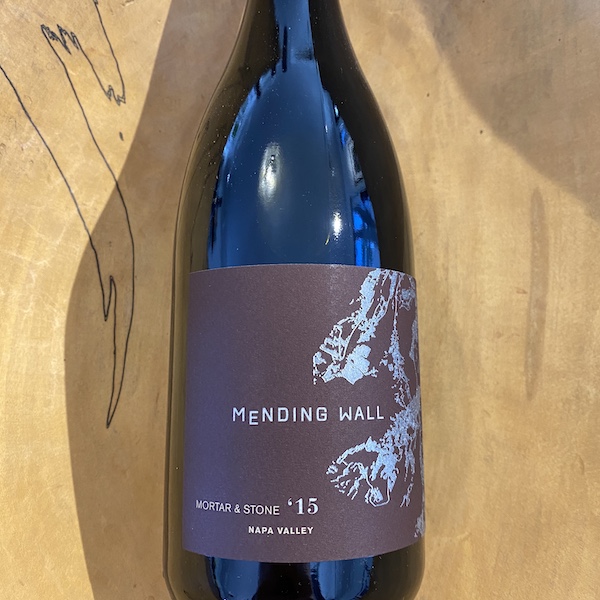 2015 marks the second vintage of 'Mortar & Stone', a Red blend of Zinfandel, Syrah and Petite Sirah. Across Napa Valley, 2015 produced tiny amounts of small grape clusters with highly concentrated flavors. Although yield was down considerably compared to the preceding textbook vintages, fruit quality was incredible, with dense flavors and heightened tannic expression. The Zinfandel from high atop Atlas Peak is robust, showy mountain fruit. Vines in the historic Mountain Peak Vineyard produce some of the most impressive berries we’ve seen in this varietal, nicely structured and spicy rather than super jammy. That spice component pairs beautifully with the final vintage of their estate Syrah. Once again, the venerable Palisades Vineyard Petite Sirah completes the blend, lending tannic backbone and deep, black color. This 2015 Red has a seductive appeal, with good balance between luscious fruit notes and earthy undertones. The wine also has great aging potential. If you drink it now, you'll want to decant it for a few hours. Putting a few bottles away to revisit in five or ten years will be rewarding. 531 cases were produced.

Mending Wall is the culmination of Thomas Rivers Brown and his decades of winemaking efforts at Outpost, owned by Frank Dotzler and Pulido-Walker, owned by Mark Pulido and Donna Walker. Together, they formed Mending Wall, located on the eastern side of Silverado Trail between St. Helena and Calistoga. Here, Thomas produces wines for his numerous clients and he also produces its namesake wines. While I have tried many vintages of their offerings since their debut in 2013, I have always found their Petite Sirah and Cabernet Sauvignon to be the best and most worthy of buying.